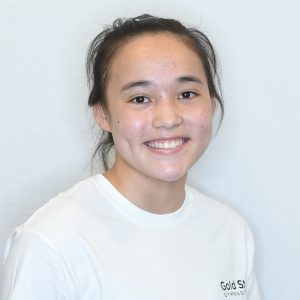 Mimi began coaching for Gold Star in the spring of 2021. She started at GSG as a MiniStar but moved through the preschool and recreational programs at a super sonic speed progressing from Girls Red to our competitive team in less than a year. Mimi then mastered each competitive level in just one season – an incredibly impressive accomplishment. She now competes as a Level 10 – just one step below the Olympic team. She had the rare opportunity to live in Japan during all of fourth grade – where she continued to tumble Nihon style!