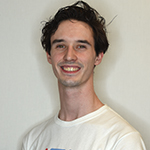 Neal began coaching at Gold Star in the summer of 2018 but has been coaching gymnastics since 2016 at a neighboring gym. He was an Eagle Scout where he was named Troupe Guide, Patrol Leader and Senior Patrol Leader. He has his CPR and First Aid certifications, and don’t challenge him to a race because he is as fast as the Flash! Able to run a mile in 5 minutes flat.